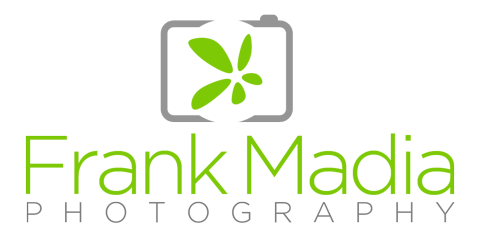 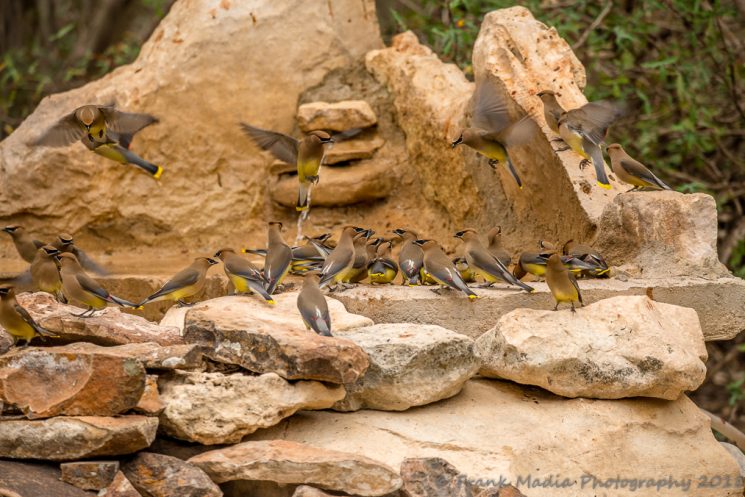 A Mid-week Visit to the Texas Hill Country

This article has been a tough one to get off the ground.  There are a variety of reasons.  I spent an alarming amount of time trying to decide exactly how to present the photographs that appear below.  If this seems odd, you should remember that over the years I have developed a personal set of “rules” regarding which photographs I will publish and which I will not.

Rule 1.  Avoid having to crop images in order to get the composition I failed to achieve through the viewfinder.

Rule 2.  Photographs of wildlife should be made in natural settings.  Avoid zoos, bird feeders, etc.

Rule 3.  The photographs should go a long way toward helping to tell the story at hand.

That which follows pretty well violates all these rules to one extent or another.  However, I wanted to share this mid-week trip to the Texas Hill Country.

The occasion of this trip was to celebrate our anniversary.  It was March of 2018.  That is correct, 2018.  I really am that far behind.  We stayed in an Airbnb in Fredericksburg, Texas.  I would provide the details of the property, except that would violate Airbnb policy.  Suffice it to say we were very pleased with our accommodations.  The property was in walking distance to downtown, was quite comfortable and affordable.

During our stay, we made two day trips.  The first was to Enchanted Rock.  The second trip was south to South Llano River State Park.

Enchanted Rock State Natural Area is located about 18 miles north of Fredericksburg.  Enchanted Rock is a pink granite mountain located in the Llano Uplift.  It covers approximately 640 acres (260 ha) and rises approximately 425 feet (130 m) above the surrounding terrain to an elevation of 1,825 feet (556 m) above sea level. It is the largest pink granite monadnock in the United States.

There is a lot of folklore and legend associated with Enchanted Rock.  The local Native American tribes attribute magical and spiritual powers to the rock, hence the name.  The Tonkawa, who inhabited the area in the 16th century and believed that ghost fires flickered at the top of the dome.  They heard unexplained creaking and groaning which geologists attribute to the rocks night-time contraction after being heated by the sun during the day.

There are several legends associated with Enchanted Rock such as:

Revered by native tribes as a holy portal to other worlds.

Anyone spending the night on the rock becomes invisible.

A Spanish priest fled to the rock pursued by native tribes, disappeared, and returned to tell a mystic tale of falling into a cavern and being swallowed by the rock, encountering many spirits in the tunnels, eventually to be spit out two days later.

Haunted by spirits of warriors of a now-extinct Native American tribe who were slaughtered at Enchanted Rock by a rival tribe.

Haunted by a Native American princess who threw herself off the rock after witnessing the slaughter of her people.

Alleged sacrifices at the rock by both Comanche and Tonkawa tribes.

Believed to be a lost silver mine or the lost El Dorado gold mine.

Bad fortune and death will befall anyone who climbs the rock with bad intent.

Footprint indentations on the rock of a Native American chief who sacrificed his daughter and was condemned to walk Enchanted Rock forever.

A woman’s screams at night are of a white woman who took refuge on Enchanted Rock after escaping a kidnapping by Native Americans.

Spanish soldier Don Jesús Navarro’s Enchanted Rock rescue of native maiden Rosa, daughter of Chief Tehuan, after her kidnap by Comanches intent on sacrificing her on the rock.

For the modern day visitor, Enchanted Rock is a wonderful place to go to get a great view of the area and a bit of a workout from the climb to the top.  Given the area’s compact size, the number of visitors allowed in the area is limited.  This limitation enhances the visitor experience while also helping to preserve the area. 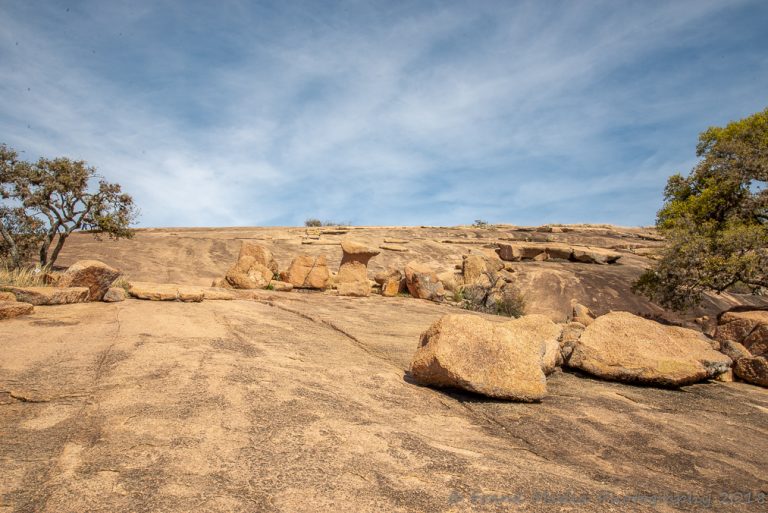 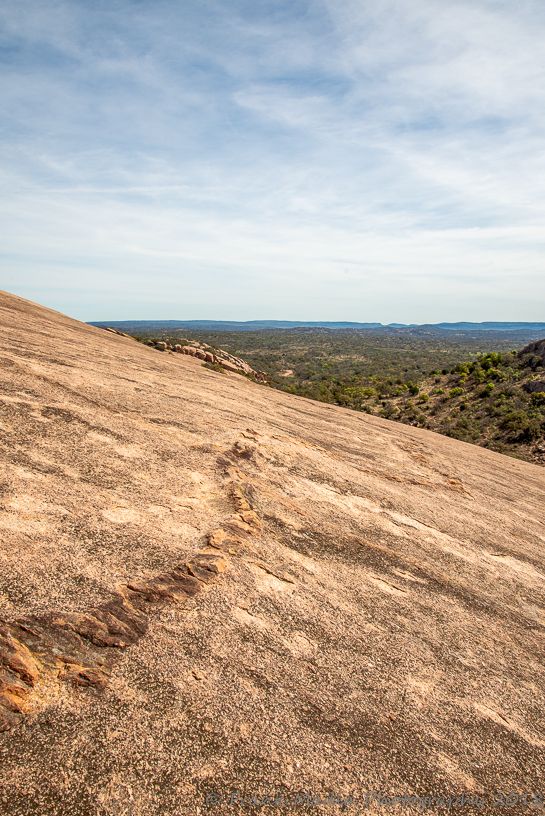 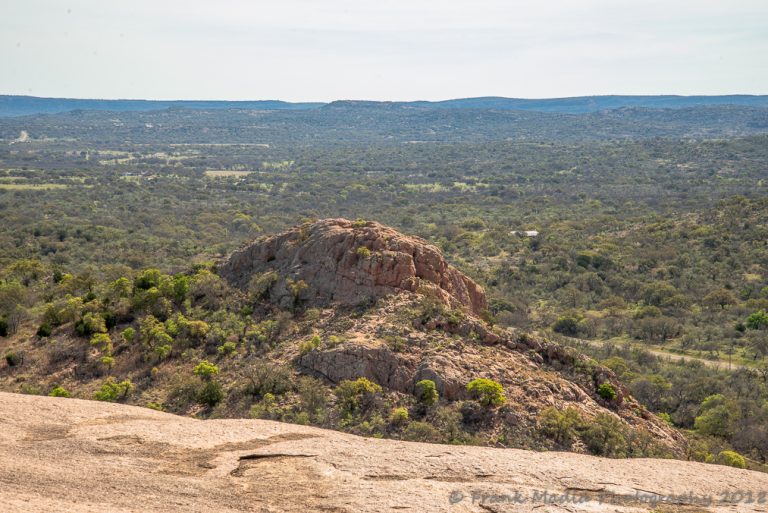 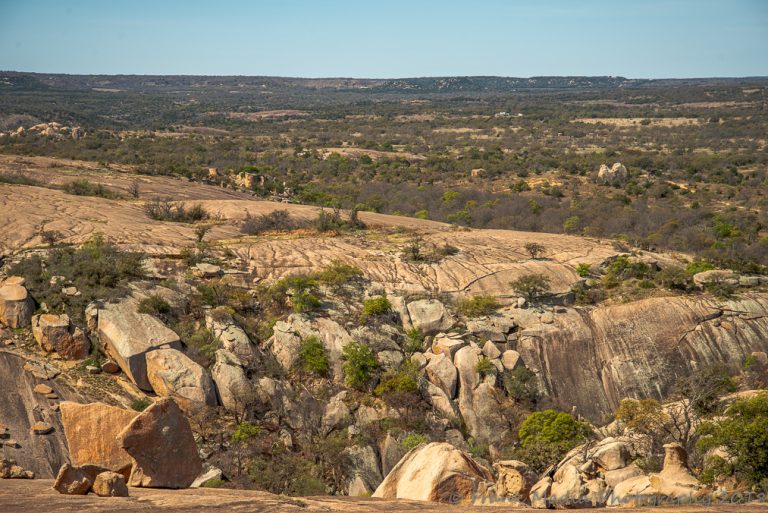 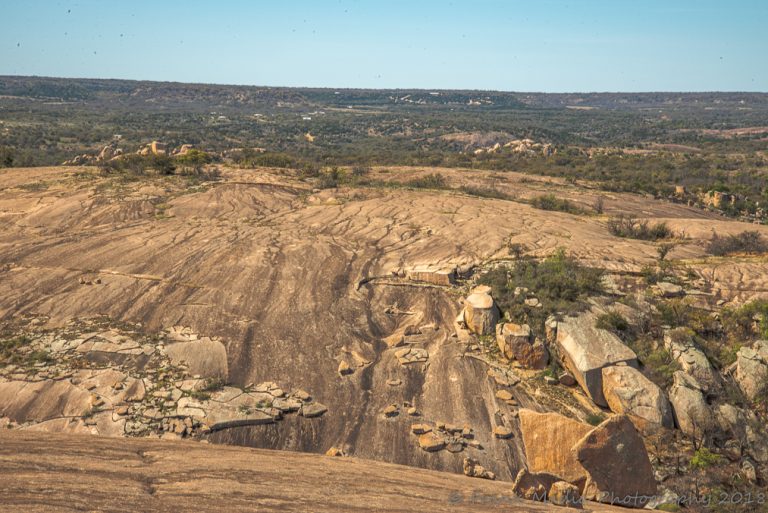 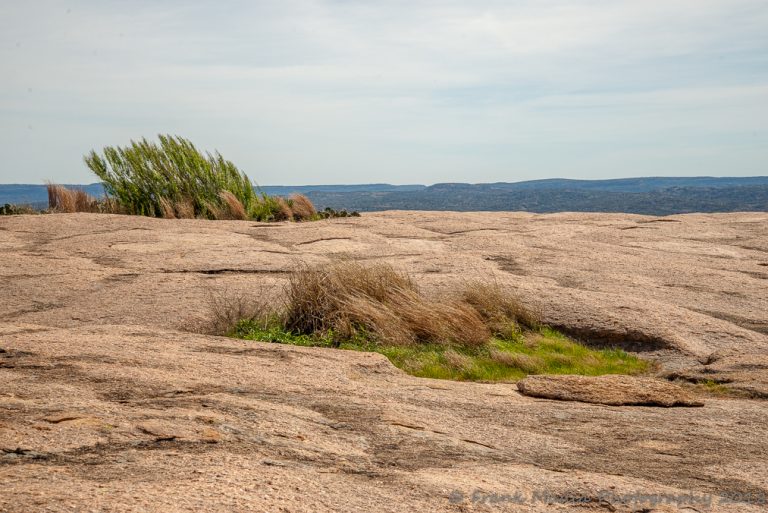 This view shows how over the centuries wind-swept dirt and seeds have come to rest in the hollows and cracks of the rock creating mini-gardens scattered along the rock’s surface. Nikon D610, NIKKOR 24 – 84mm,1/400 sec., f/13, 66 mm, ISO 320

When we came down from the top of the rock we enjoyed a walk along one of the nature trails in the protected area.  Of course, we were on the lookout for spring birds.  We likely should have taken the hike prior to the climb up the rock as the midday walk produced on fleeting peaks at birds we were unable to photograph.

That said, it was time well spent.  Since Enchanted Rock is so close to home, we will visit it again.

The South Llano River is spring-fed and slow-moving making it great for family water fun.  The park has two miles of river frontage and multiple put-in and take-out points for tubers along the way.  Fishing is allowed in the park and the park even has a fishing gear loaner program.

There are 22.7 miles of hiking and biking trails that range from easy to difficult. The trails offer river bottom crossings, steep ridges, and wooded areas.  Among the many trail options, are rugged backcountry trails offering solitude in moderate to challenging hikes or bike rides.  The views from these trails are very different from those of the park’s lowlands.

The park has a campground with water and electrical hookups with bathrooms and showers.  There are also five primitive walk-in campsites with a nearby chemical toilet.

South Llano River State Park is an International Dark Sky Park.  When the night skies are clear, the stargazing can be wonderful.

Of course, there is an abundance of birds who visit the park.  Many call this area home for the summer season.  Many others use it as a stopping off point on their migration routes.  Connie and I love to come here for the birds.  I have read that the park boasts that is home to one of the largest turkey roosts in Central Texas.  I will have to take their word for it, as we have not been in the right place at the right time to see the turkeys.

That said, during this visit we did see some wonderful birds.  The photography was not as wonderful as the bird sightings due in part to the poor light we had during most of our visit.  I do hope you enjoy these images captured at a bird blind. 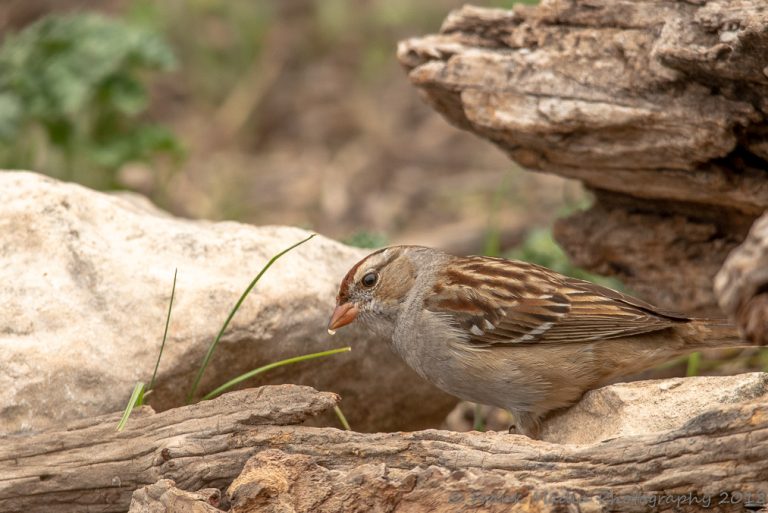 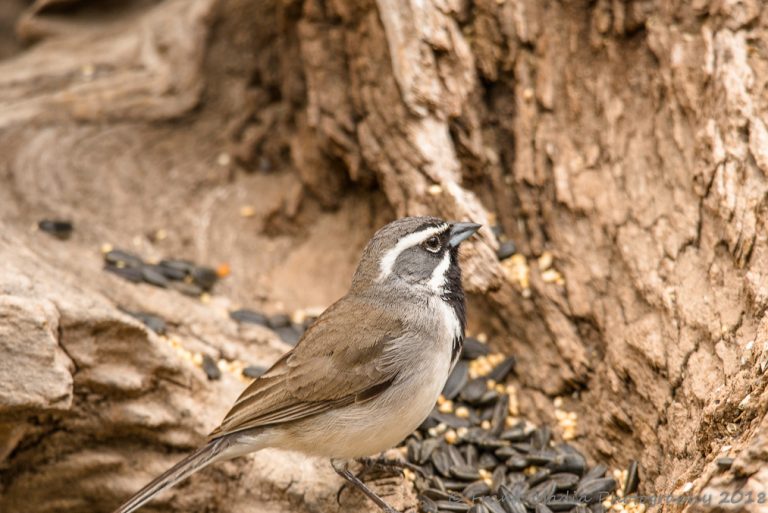 The next several images show the abundance of Cedar Waxwing who frequent the area.  I tried to highlight the somewhat controlled chaos that existed around the water feature at the blind. 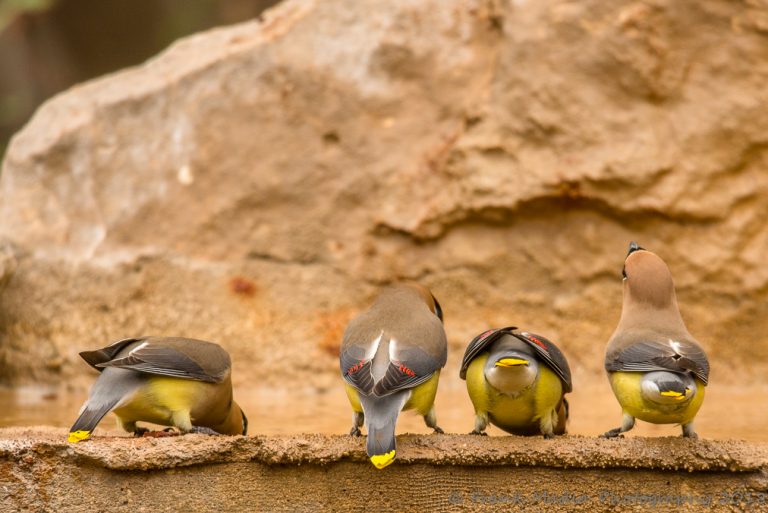 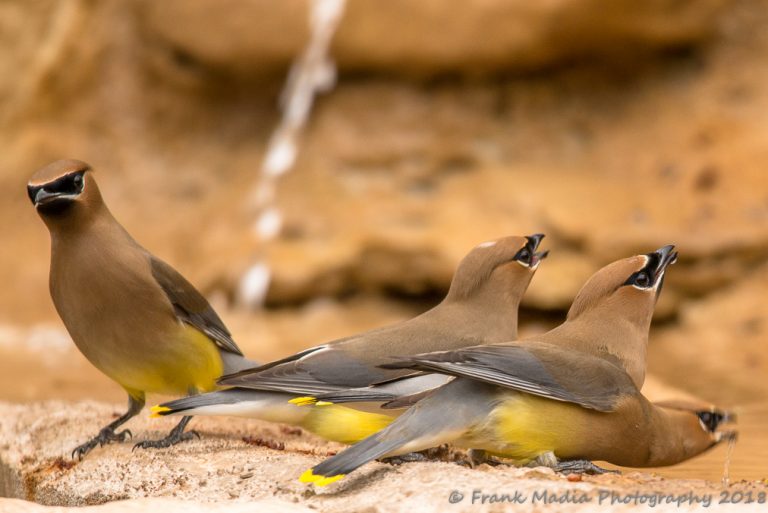 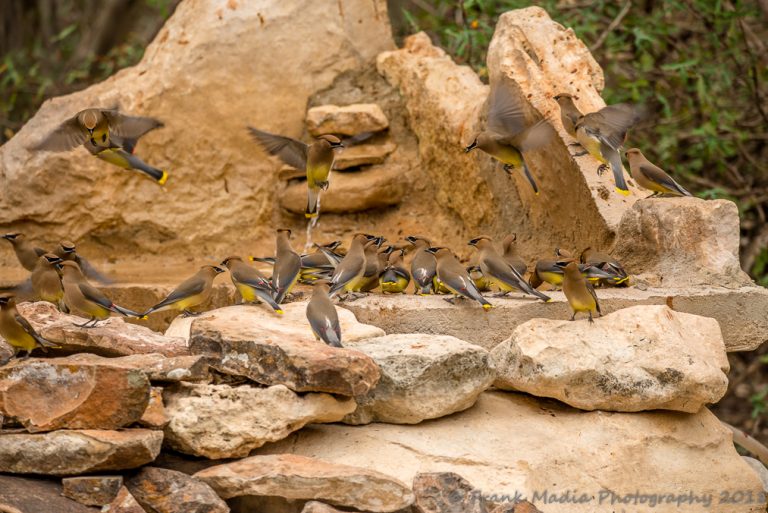 Sometimes one gets lucky and all that can be seen in the image is the target bird. 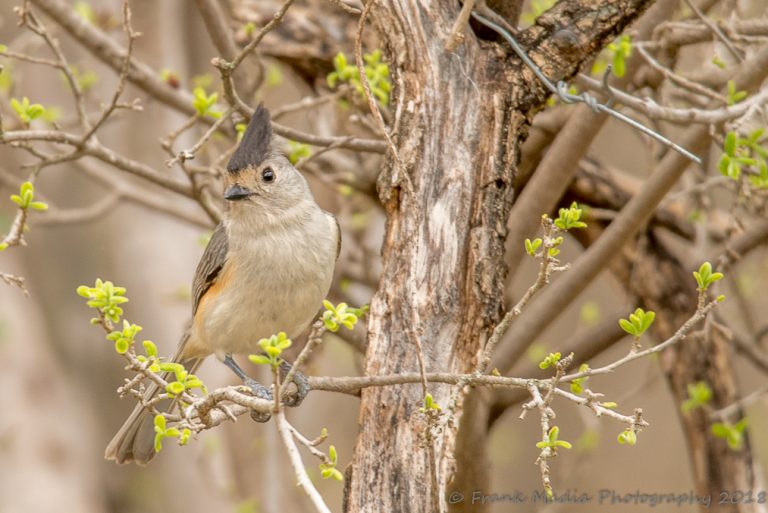 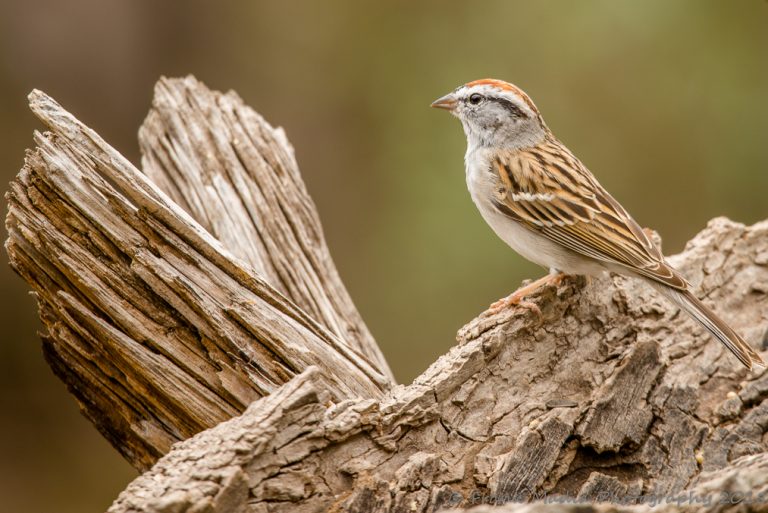 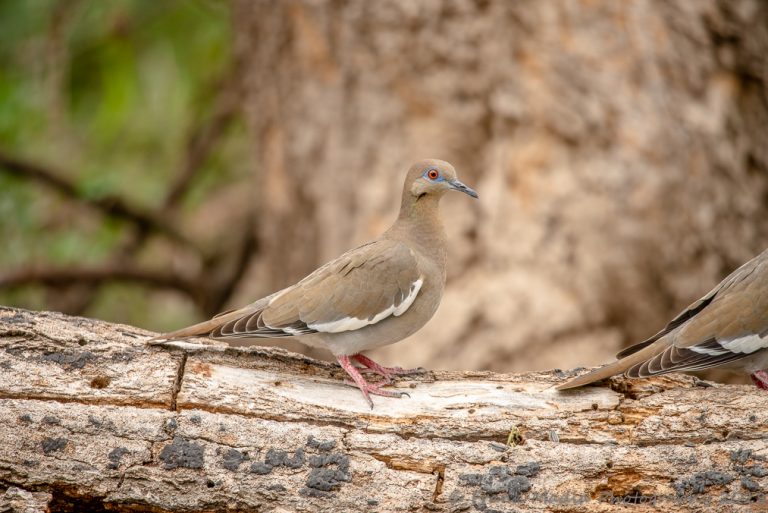 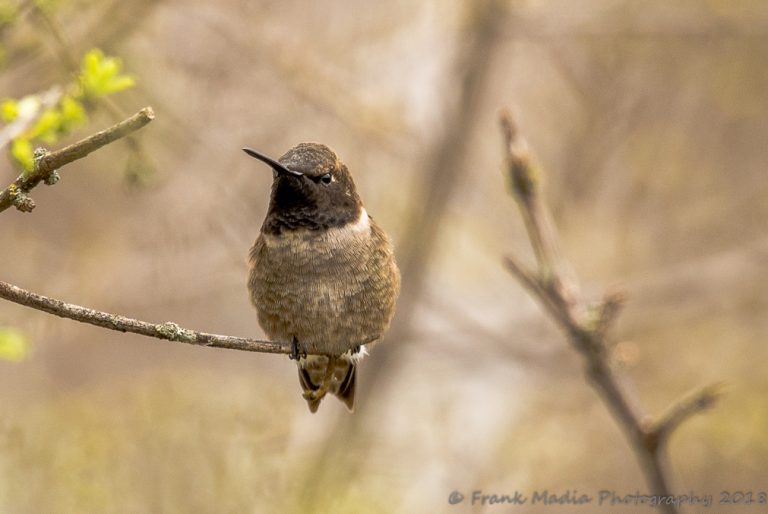 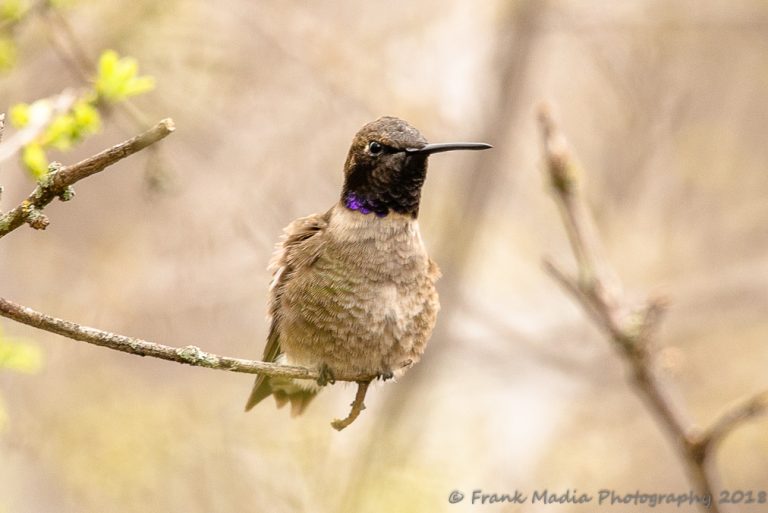 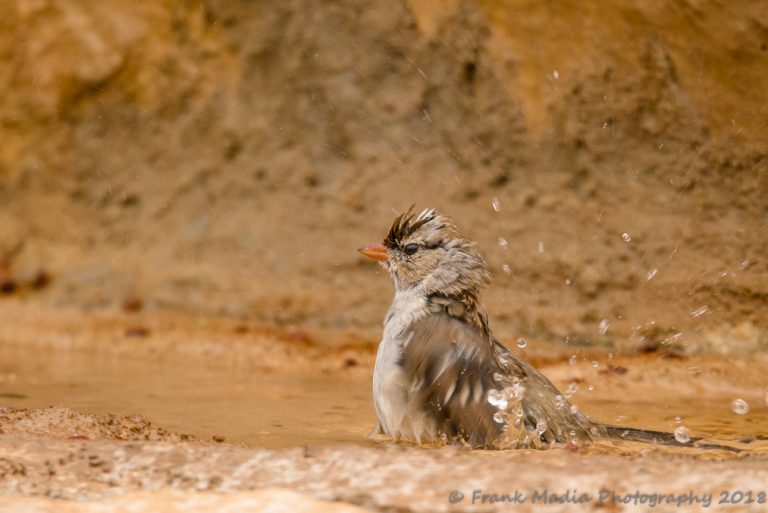 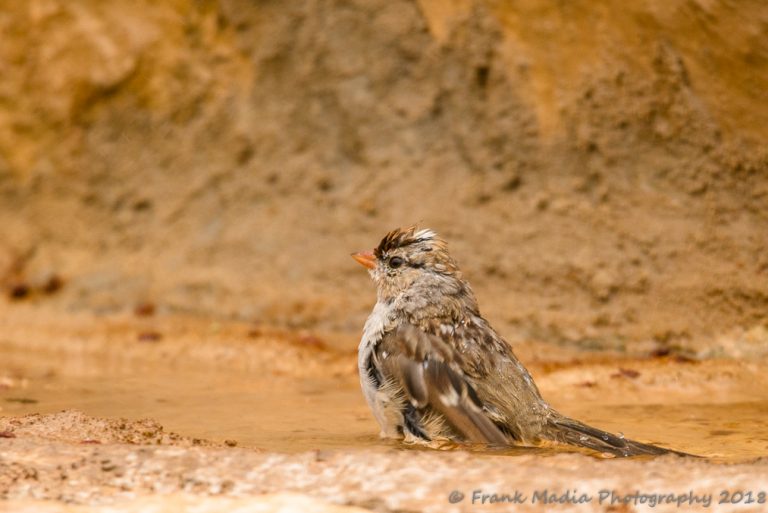 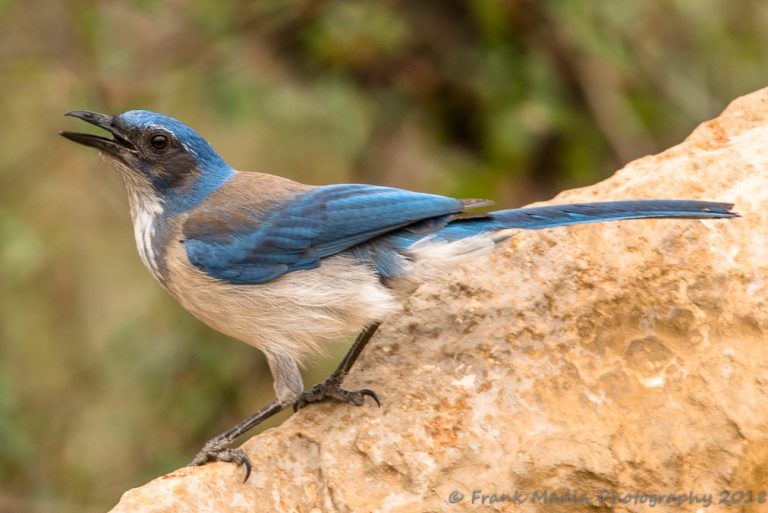 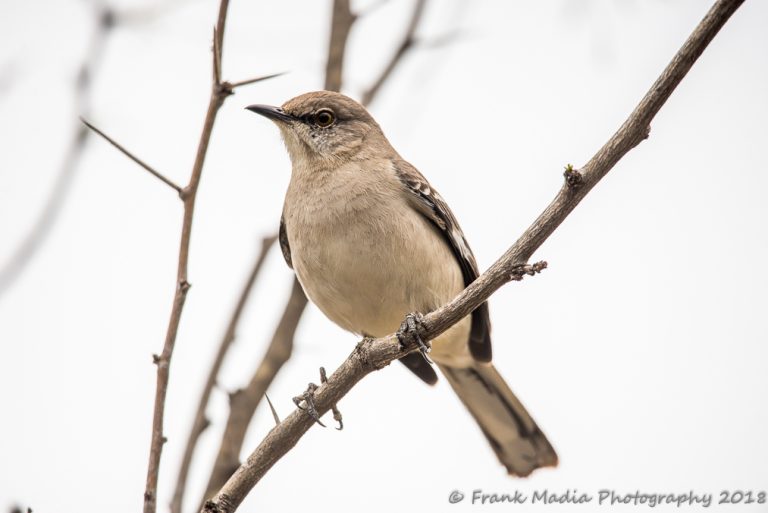 These last two images are those of a single Cedar Waxwing.  This bird was perched much closer than those around the water feature.  I was able to reduce the amount of cropping for these images.  One of many things that attract me to Cedar Waxwing is the smooth appearance of the features regardless of how tight the photo. 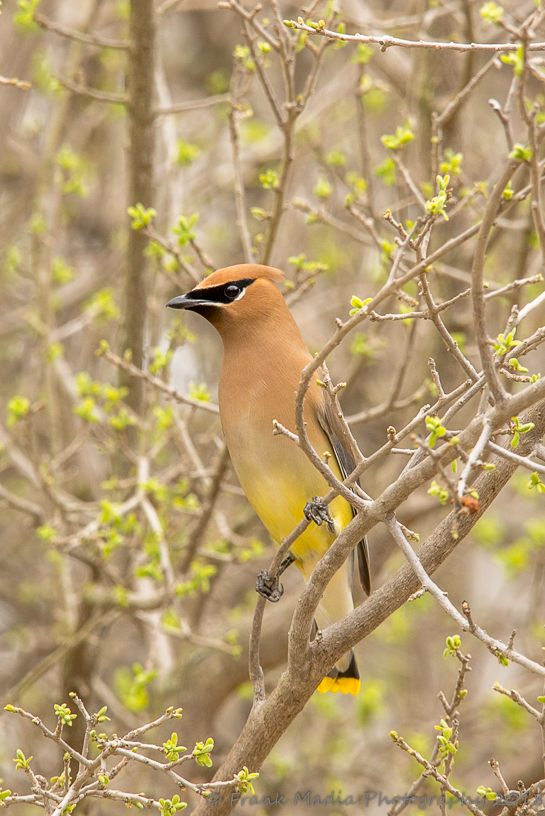 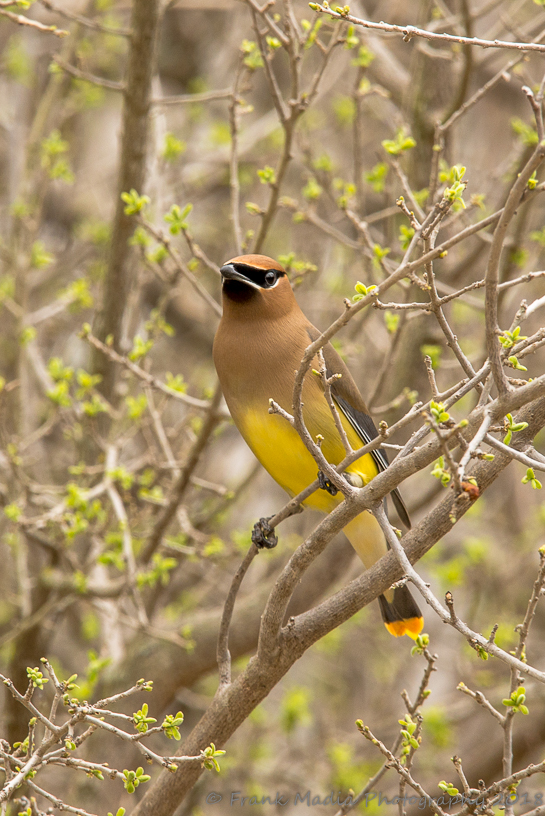 The Texas Hill Country has a lot to offer for any sort of traveler.  We thoroughly enjoy each and every visit we make to the area.  I encourage anyone who intends to visit Central Texas to carve out some time to visit the Hill Country.  You will not be disappointed.  I didn’t even talk about eating and shopping in Fredericksburg!